This week has been the most exciting one since I was enrolled in medicine a year and a half ago. All the clinical skills that we had been doing were taking histories and role playing, nothing as exciting as this week besides injection.

So, I had just rushed back from uni after a venepuncture tute! At first, I was overwhelmed by the detailed instructions given and the registered nurse in charge was in fact quite strict. When I first had my hands on the mannequin, they were shaking uncontrollably but I got used to that after while. All the instructors kept on hammering the important instructions so that they were etched in our minds. After that, we had s try on each other and it was so exhilirating! I did alright but I could feel palpitations and my stupid hands just wouldn't stop shaking violently. I did get some aewsome blood from Li Ping though.

Speaking about Li Ping, I wish to apologize to her. She inserted the needle and perhaps went into a wrong direction because I still have the puncture site for donating blood several weeks ago. So, she decided to pull the needle out slightly, thinking that she might have gone too deep and so the needle went all the way out from the skin! It was very painful for a second or so and I flinched. I am sorry for my over-reaction. Luckily, she did one successfully on another guy's arm ^^ 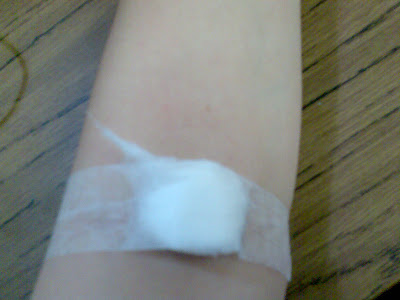 My arm after venepuncture!

Breast examination on monday was awesome as well. We were supervised individually like in the venepuncture tute as well. The CTA people were well-trained and I did not feel a minute of awkwardness in touching the breasts.

Just a side note, we had a mini floor function yesterday night and watched Dark Knight. And dinner was at the famous Pancake Parlour. Eva, Mehgan, Ken, Chau Wang and I reached home after midnight, wondering would we get terrible nightmares. It was a terrific movie but the Joker was such a psycho and made me feel sick in the tummy though.
- August 28, 2008

hey yunying, i m the one should be saying sorry! Anyway, i must say that the one u did on me wasn't painful at all!
u love urban week oh? i feel that it is quite boring though...haha the thoughts of assignment just put me down LoL
see ya tomoro in lectures =) 3 hours of lecture in the morning, hope it is interesting~~

lol....i thought we had a fairer timetable than Group A because at least we have a week to work with the assignments! 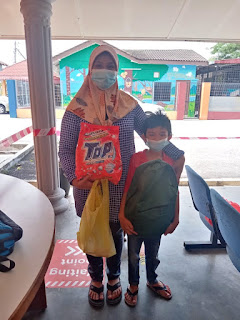