We had a restful night sleep and woke up only around 10am+ the next morning. The main aim was to visit Osaka castle. 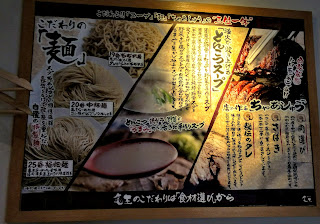 Decided to have an early brunch. We just haven't had enough ramen! 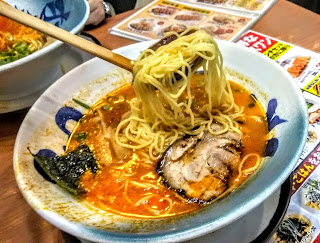 Spicy ramen. The Japanese standard of spiciness is quite formidable. Really have to take my hats off for this. Have this with a slice of braised pork and Kombu, it's sure to satisfy craving for shin ramen and the like. 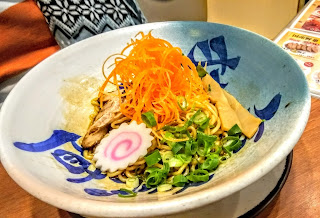 Dry ramen. Just like our dry noodles, this is seasoned with a punch of great flavors particularly sesame oil. Have this with raw julienned carrot and preserved radish. A taste that one can't find out of Japan. 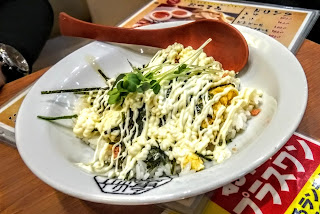 Shredded salmon with dried seaweed pieces, scrambled egg and a very generous flood of mayonnaise! Lots of calorie but it's well worth it. 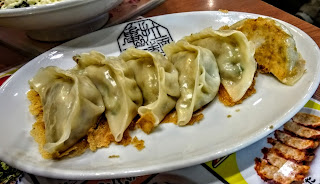 We walked through Osaka park. Even enough all the sakura trees were withered, the view was still spectacular with a hint of melancholy by the river.

The view of the surroundings of Osaka castle. 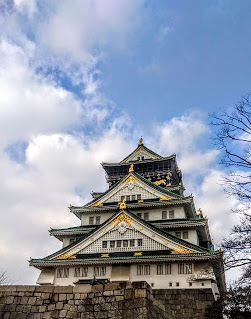 Osaka castle is no longer inhabited by the Royals. Instead it has been converted into a museum showcasing the Japanese kingdom with the stories of the great warriors such as Hideyoshi. It's full of tourists and young children running around and having fun. 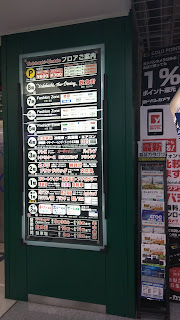 Spent the afternoon at Yodobashi-Umeda (Umeda subway) which is a departmental store with a wide range of products particularly electronics and cameras. 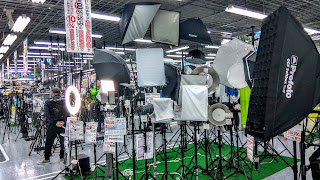 Even for flash, there's such a comprehensive range. But the price range is not that different from Malaysia so we didn't buy in the end.

Afternoon tea was at Yodobashi The Dining on level 8. Here we found the famous okomiyaki.

The traditional okomiyaki is made of a mixture of flour with julienned cabbage, carrot and meat eg pork or seafood. Here one can order to add on yellow noodles. So you could imagine how big each portion is!

Watch our prawn okonomiyaki cooking on my YouTube channel here. Look at the generous amount of bonito flakes and sauce. Mouthwatering indeed! 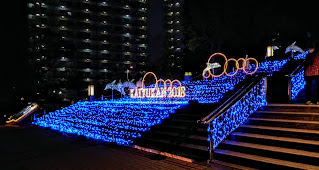 We had a great stroll around Osaka Bay area later in the evening. Enjoying the neon litted walkway and entrance to the aquarium. We didn't visit the aquarium as baby Bing is still too young to enjoy the visit.

Dinner was at Tempozan marketplace but we only got there around 7pm and most of the outlets were already closing. Kind of disappointed because there were so many variety of Japanese dishes available! So we settled with a simple ramen soup with tempura. 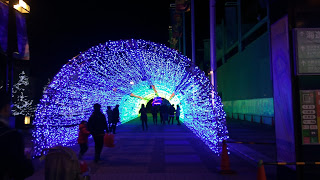 Got onto Tempozan Ferris wheel after dinner. We boarded the transparent cubicle without extra charges. The ground was kind of semitransparent but we could tell that Bing felt kind of apprehensive in there. The whole trip took 15 minutes at 800 Yen each. 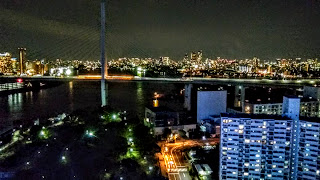 The view of the whole Osaka city was spectacular! Mount Ikoma to the east, the Akashi Kaikyo Bridge to the west, Kansai International Airport to the south, and the Rokko mountains to the north. With the diameter of 100m, it's one of the world's largest Ferris wheel.

This ended our second day in Osaka. Stay tuned for day 3!