We were still very energetic on day 3 despite all 3 of us were down with cold. Having had a late night the day before, we started the day slightly later. 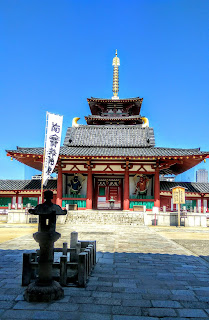 First stop was Shitennoji temple (Shitennoji-mae Yuhigaoka subway). This Buddhist temple housed a pagoda with Buddhist relics which is one of the oldest Buddhist temple in Japan.  It took 5 flights of windy and narrow stairs up to reach the top. We were kind of out of breath with Bing being carried by daddy. 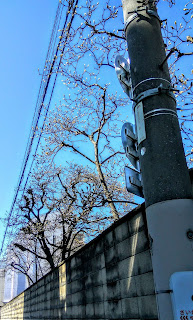 On our way walking from the subway station, we were lucky enough to be blessed by the view of budding sakura flowers. 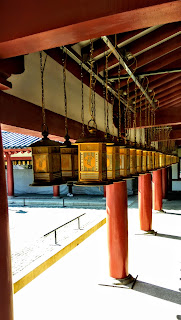 Shitenno actually refers to the four heavenly Kings 四大天王. Love walking through the corridor with these beautiful lanterns hung by pilgrims as offerings. 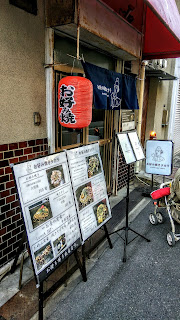 On our way back to the subway station, we stopped by okonomiyaki takara， a very homey bistro. 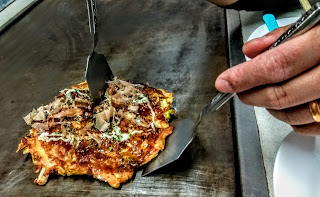 The okonomiyaki here is the traditional type and just a palm sized big. 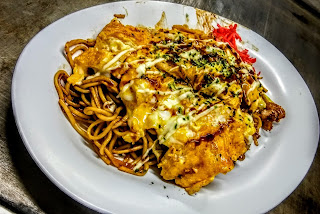 A hot plate of yakisoba fried on the grill. With a yummy omelette. It's just as if we were invited over to have a meal at a friend's place. 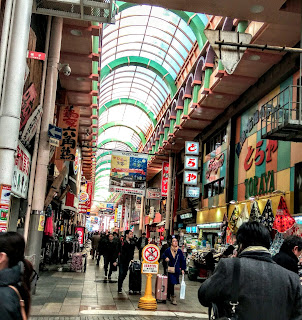 Afternoon was shopping time! We headed to    Dotombori Arcade (Namba subway) which is even much more complicated that tenjinbashi shopping street (which has 400+ shops). From high end fashion to email eateries, it also boasts many specialty stores for example kitchen and cooking supply (Doguyasuji Arcade) in the adjacent area. We were not really into serious shopping but merely window shopped and just basked ourselves in the atmosphere. 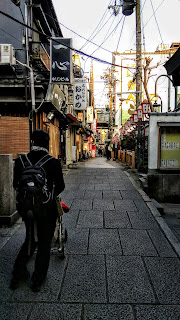 Of course we have to explore Hozenji Yokocho which is the traditional alley. I love how everything looked so old school there.

Admiring a Buddhist statue that's overgrown with green mould as it's accustomed for visitors to sprinkle it with water before saying prayers.

The highlight of the day was perhaps the much anticipated yakiniku beef at Matsuzakagyu Yakiniku M. It's expensive but highly recommended! About RM150 per person. This breed of beef was touted to be have higher quality than wagyu and Kobe beef. The cattles were feed beer and given massage to create this ultimate delicacy.

We chose the rare cuts- marbled beef (a balanced combination of lean and slightly fatty parts) in the form of sirloin steaks, kyukoku and maboroshi cuts. 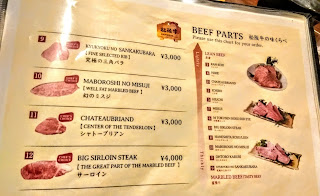 There's no need to marinate because the beef was just so fresh that after grilling it's ready for taste! One can dip the piece of delicacy into soy sauce/ BBQ sauce/ salt and pepper. It just melted in the mouth. 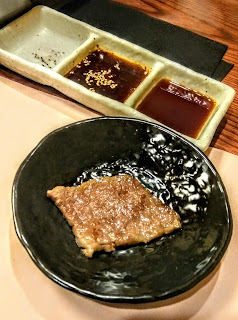 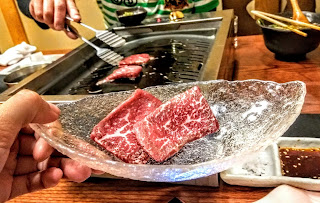 Comparing with the wagyu pieces we had, this was definitely much more superior. 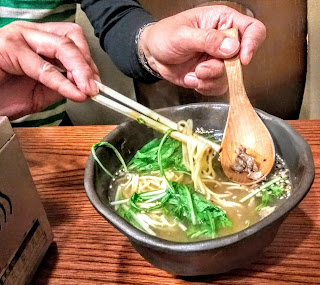 The beef noodles was also heavenly. Rich beef broth that's so fresh and sweet. Even baby Bing couldn't resist to finish half a bowl on his own. 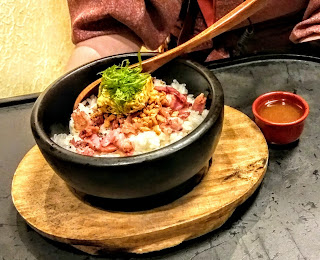 With the awesome memory and taste of this premium beef cut, we ended day 3 in Osaka.